Watch documentation of Hole's MEDEA aboard the FLOATING LIBRARY here 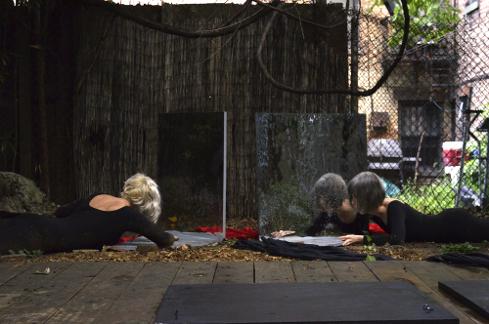 A performance by Hole

HOLE is a collaboration between Colleen Asper and Marika Kandelaki aimed at destroying the forms of patriarchy enveloping our Imaginary.  Previous performances have taken place at the Bowery Poetry Club, Soloway, and Garden Party/Arts.

Medea is a vessel twice filled and emptied. From the perspective of the Greeks, she was born to barbarians, yet in her homeland Colchis she held a place of honor as a woman who understood the secrets of nature closed to man. Nature was an inexplicable force that was worshipped and feared, even placated or deceived, but never fully controlled. Woman, the inessential other, served as a conduit to this absolute Other. She mediated its force but could never possess it; rather, her proximity to man allowed him to reach through her to possess what otherwise was beyond his grasp. She was wrapped in mystery only to be unwrapped to reveal a passage to an infinity of which she was merely the container. Medea understood that in order to become a subject she had to destroy herself as an object; when Jason came to Colchis she knew only that he was an outsider to everything she had known, and she murdered her brother and betrayed her father to help Jason because doing so allowed her to destroy herself. The other collapsed into the Other and returned as supernatural; Medea performed her first negation and entered the unknown.

In the Greek lands that Jason took her to, nature was dethroned and humanity put in its place. Medea’s Gods had been replaced with Man. Matriarchy, in which woman was revered only in order to be maintained as other, was replaced with patriarchy, in which the other reflects the phallus, rather than some fearful cosmos. And so Medea became a vessel once more and this time was filled with Man. In Corinth she bore Jason three sons; the mystic had became the mother. Her body became the body of her children. Through this connection she felt the distinction between subject and object dissolve; Medea imagined she was part of Man. When Jason announced that he was leaving her to marry the king’s daughter, her exile was complete. She no longer belonged to Man, her subsequent banishment from Corinth was redundant. Medea had so completely betrayed everything for Jason that to be left by him was to be left to nothing. She was poised to become yet another Antigone, another tragic heroine. Instead, Medea murdered the players in her own tragedy—the king, his daughter, and finally, her own children.

In doing so Medea left us with a decision about how to fight power: through fidelity to the old, the sacred, and the familial threatened by power, or by out-violencing power itself? When Antigone opposed the universal claims of state power it was to defend the particular claims of the family. When she murdered the king and his daughter Medea also did away with the state, and in this she was acting as a hysteric, set on destroying her master. But Medea had learned how easy it was for one master to be replaced by another. This time she had to destroy Man. The mystic and the mother both reproduce the very structures that exclude them—there is no politics of return. When Medea murdered her own children she performed the negation of the negation, she out universalized universal power itself. Now she was the master of nothing.